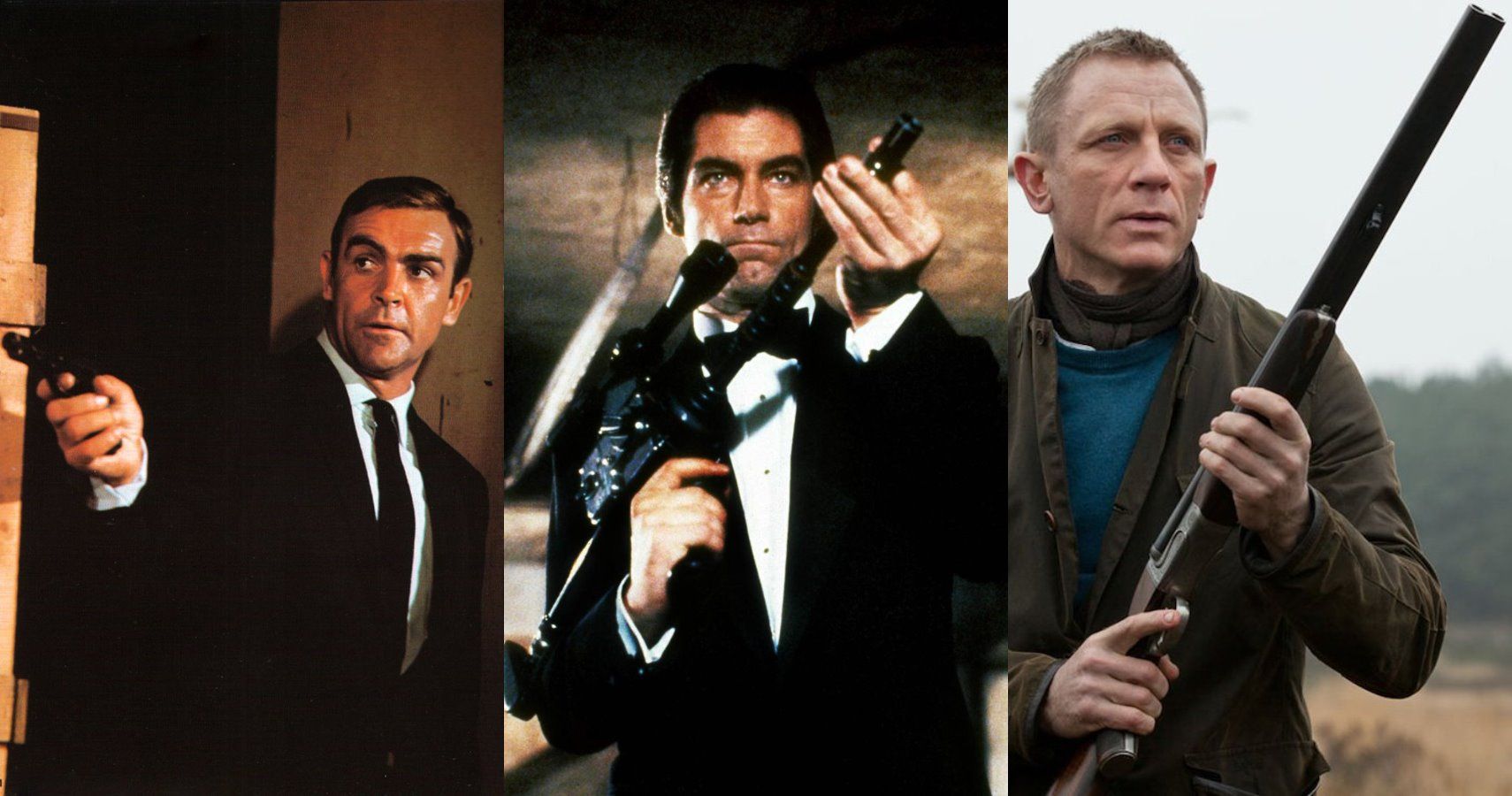 There are some things that are definitely going to happen in a Bond movie. Among those guarantees, fans can rest assured that quite a few people are going to die. Several people have been killed in The Bond Series, and most of those deaths can be a bit ridiculous.

RELATED: How Many People James Bond Has Killed

That said, there are a few kills in the series that raise an eyebrow. Some of them were warranted, some not so much, but most were committed by Bond. With No Time To Die still on the horizon, let's look at the times where 007 got... over-excited while defending Queen and Country.

Now, to be fair, Emile Locque from For Your Eyes Only definitely deserved to die. A silent hitman employed by main baddie Aristotle Kristatos, Locque was responsible for running over an innocent woman that Roger Moore's Bond had his eye on. However, the way that Bond got his revenge was pretty cold.

After a car chase, Locque's car dangles over a cliff, when Bond walks up, throws the lady's pendant into the car, and then kicks the car off the cliff. If you think that's somewhat out of character for Roger Moore's Bond, you're not alone, as Moore hated the scene.

Skyfall's Raoul Silva was of the best villains Bond had faced in years, and his death was a fitting one for sure. Javier Bardem's Silva, having perpetrated a scheme that led to the deaths of several MI6 employees that Bond probably really liked, tracked Daniel Craig's Bond and Judi Dench's M down to Bond's childhood home in Scotland.

After an errant explosion mortally wounds M, Silva offers to put both of them out their misery, only for Bond to throw into Silva's back, leaving Bond as the "last rat standing," calling back to a tale that Silva recalled to Bond.

The Spy Who Loved Me is probably Roger Moore's best turn as James Bond and features some fun kills. However, there is a rather hardcore murder that Bond carries out that feels like it comes out of nowhere. Sandor isn't really a memorable henchman in the film, mainly because the film also features the iconic character of Jaws, but his brutal death makes up for that.

After accidentally shooting a woman that Bond is pressing for information in his traditional charming fashion, Bond battles Sandor throughout the rooftops of Cairo, which leads to Sandor dangling by Bond's tie from a ledge. After getting some information from the henchman, Bond swats his tie away from Sandor's hand, causing him to plummet to his demise.

Timothy Dalton's Bond was pretty ruthless and License To Kill is proof of that, however, a particular death in the film felt oddly satisfying. Dario, played by a debuting Benicio Del Toro, is a psychotic henchman for drug baron Franz Sanchez. Dario earned Bond's ire by murdering Felix Leiter's wife and helping with Leiter's maiming via a shark attack.

Towards the end of License To Kill, Bond holds on for dear life on a conveyer belt that looms over a cocaine grinder. Dario attempts to knock him into the grinder, before being distracted by CIA agent Pam Bouvier, which allows Bond to pull Dario into the grinder.

A lot of fans didn't really know what to expect from Daniel Craig's Bond in Casino Royale, but many were very excited to see that the actor's reign would see a return to the darker roots of Ian Fleming's novels. In Casino Royale, Bond earns his 00 status by killing two high profile targets, one of which being the double-dealing Dryden, whom Bond simply shoots.

What makes this kill so cruel? Well, as Dryden reels back after being shot, there is a quick shot of a picture of Dryden with his family. Dryden might not have been a good person, but he more than likely loved his family, which paints the scene where Bond kills him in an unceremonious manner with a whole new brush.

Tomorrow Never Dies, Pierce Brosnan's second outing as 007, isn't as well-regarded as it's predecessor, but it possesses a solid villain. Johnathan Pryce's loony news mogul Elliot Carver is as cold-blooded as he is over the top and his death lines up with his character.

In the explosive climax of the film, Carver has Bond at gunpoint aboard his sinking warship. As Carver delivers a villainous monologue, Bond activates the sea drill that Carver used to slaughter a submarine full of British soldiers, before subduing Carver and pinning him to a computer allowing him to be shredded by the drill.

Most of the deaths in Dr. No, which kicked off The Bond Series, are pretty low-key with the exception of the title villain. Professor Dent, played by Anthony Dawson, is a henchman of Dr. No who makes several attempts to kill Sean Connery's 007 to end his investigation into the good doctor's affairs. When Dent tries to kill Bond in his sleep by emptying his gun into the agent's bed, Bond reveals that he is behind Dent before shooting him.

The scene caused controversy because Dent couldn't truly defend himself, so Bond essentially killed a man in cold blood. To add to this, Bond shoots him a few more times after he collapses, seemingly without a care in the world.

After the middling box office returns of License To Kill, Pierce Brosnan's debut in Goldeneye proved that Bond would never die, being fondly remembered by many fans. In Goldeneye, Bond's former ally, Sean Bean's Alec Trevelyan, returns after faking his death to wipe out England's economic system as revenge for what happened to his parents who were Cossacks.

After having his plans thwarted, Trevelyan pursues Bond to the top of his lair. After a brief battle, Trevelyan falls off a ledge, only to be caught by Bond at the last second. Bond stares at him for a brief moment before letting him fall to the ground below. However, the fall isn't enough to kill Trevelyan, it takes his entire base falling onto him to finish him off.

The World Is Not Enough is pretty divisive among Bond fans, but Pierce Brosnan's third entry in the series does make history for having the first-ever female Bond villain in Elektra King. Sophie Marceau's King, the heiress to an oil empire is seemingly targeted by her former kidnapper Renard, played by Robert Carlyle.

It is then revealed that King and Renard are working together to get revenge on M, who convinced King's father to refuse Renard's ransom demands. Towards the end of the film, Bond catches up to Elektra and demands that she call-off her nuclear attack on Instanbul. When she claims he'd miss her if he killed her, Bond shoots Elektra in cold blood before saying that he "never misses."

A bit of a sunrise-sunset situation for Roger Moore. View To A Kill is not a good film, but to say that Christopher Walken's Max Zorin isn't a highlight would be foolish. In the movie, Zorin attempts to destroy Silicon Valley to get the edge on microchip production which wouldn't really work but that's not important.

The Nazi-bred Zorin ends up meeting his well-earned demise during a fight with Bond on The Golden Gate Bridge. After losing his footing, Zorin falls into the water below. It's a death that even Zorin himself finds amusing.

NEXT: James Bond: Ranking The Films By Book Accuracy

Related Topics
About The Author

Ever since he was a young lad, Seth Rector has had a love for all things that reek of geek. Movies, tv shows, comic books, and video games are what he considers his wheelhouse. A writer at heart, Seth says he's over the moon now that he can write about what he loves. When he isn't writing for Screen Rant, he is putting his film degree from Lights Film School to good use by working on future film projects.